How stable is the Nordic financial sector? 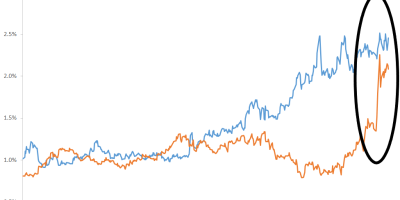 In 2008, banks were too fragile given the risks on and off their balance sheets. Many banks failed, others were rescued by governments/taxpayers. The societal costs were enormous. In a new publication, I evaluate the robustness of the Nordic financial sector today. I conclude that the Nordic financial sector is more robust than in 2008. This is important because we are currently going through a severe recession. If banks today were as weak as in 2008, this recession would have been even worse.

Once a year, Nordregio publishes the Nordic Economic Policy Review. The theme of this year’s publication is “Financial Regulation and Macroeconomic Stability in the Nordics”. Because of my experience from analyzing the financial crisis in Denmark in 2008 (I chaired the government-appointed committee that investigated the causes and consequences of the financial crisis in Denmark, the Rangvid-committee, link), I was asked to write the first paper in the publication (link), assessing the robustness of the Nordic financial sector today.

It is a policy paper. No fancy equations and regressions, but straight-to-the-point analyses and conclusions. The Review was published Tuesday, June 16. At its launch, I participated in a panel debate with, among others, two former deputy-governors at Riksbanken (the Swedish central bank), a former governor at Riksbanken, and myself. In this post, I review my main conclusions and relate them to this crisis.

An ironic incident
I start my paper emphasizing that it is difficult too foresee financial crises.

As an example, the first-page headline – typed in large bold letters – in the 2008 Financial Stability Report of Nationalbanken (the Danish central bank) was: ‘Robust Financial Sector in Denmark’. The Financial Stability Report analyzed the robustness of the Danish financial sector. It was published in May 2008, i.e. only a few months prior to the outbreak of the worst financial crisis since the 1930s. Half of Danish banks disappeared following the financial crisis of 2008.

Even if this headline probably still haunts Nationalbanken, Nationalbanken was not alone in not foreseeing the financial crisis. On the contrary. Financial crises are almost per definition unpredictable. If it was generally accepted that a financial crisis was in the making, action would surely be taken to prevent it. In this sense, we tend to become surprised each time.

The first version of my analysis was written in autumn last year. The final version was submitted in January this year. Right before the corona crisis.

I had not seen the corona crisis coming. In particular, I had not seen how severe it would be. Clearly, I was not alone either. Financial markets, for instance, had not seen it, and financial markets summarize the average views of all investors. Stock markets, credit spreads, stress indicators, etc. did not react before the crisis was in fact happening. So, was my assessment of the financial sector in January – that I present below – “robust” in light of the events that have happened? I will return to this in the end.

Why an important question?

If financial crises, and more generally stress in financial systems, are so hard to predict, why do we bother? There is one main reason: The societal costs associated with financial crises are enormous.

The blue line shows developments in real per capita GDP (in USD to allow for a comparison across the Nordics) whereas the red line shows hypothetical GDP assuming no crisis. Before the crisis, real GDP per capita was developing steadily around the growth trend. The crisis changed this dramatically. GDP fell 5% during the crisis, itself a huge drop in GDP. On top of this, however, the recovery was slow. In 2018, ten years after the crisis, GDP had not recovered to the level that could have prevailed had there been no crisis. In fact, ten years after the crisis, the accumulated difference between hypothetical no-crisis GDP and actual GDP amounts to 91% of GDP in 2008. One year of GDP was lost due to the crisis.

I present these calculations for the other Nordic countries and other crises. The editors of the publication, Lars Calmfors and Peter Englund, in their introduction, summarize the results as follows: “Losses accumulate to a staggering one or two years of economic output”. This is why it is important to deal with financial crises.

In the paper, I describe the underlying causes behind the crises in the Nordics, as well as similarities and differences across countries. I skip this here. Read the paper to get it.

As the next step, I venture into a kind of risk assessment.

Literature on financial crises concludes that even when it is difficult to foresee crises, some variables tend to be more informative about risks to financial stability than others are. I mainly discuss credit growth, house price growth, and household leverage. I conclude that lights are not flashing red.

House prices and household leverage are other important indicators. In the Nordics, they have been growing for almost three decades. House prices are currently high, as are levels of household debt.

At the same time, it is difficult to use an indicator that has been increasing for almost three decades as a predictor of the timing of a turnaround. The literature typically uses a three-year window for house-price growth when predicting crises. House-price growth has not been particularly strong during the recent couple of years.

I conclude that house prices and levels of household debt are high but their developments are not particular useful to predict the timing of a crisis, and thus not supporting a conclusion that “a crisis is around the corner”

Robustness of the financial sector

Capital and liquidity requirements have been tightened, stress tests are conducted more systematically now, assuming even more severe stresses than assumed in stress tests conducted before 2008, restructuring and resolution regime have been introduced, macroprudential instruments employed, etc. I conclude that the financial system in the Nordics is more resilient today. This graph is just one way of illustrating this:

Does all this (no lights flashing red and a more resilient financial sector) mean that there is no cause for concern? That would be going too far.

Today, interest rates are very low in an historical content. I use this graph to illustrate:

The figure shows monetary policy rates in the Nordics since the early 1990s. Rates have been constantly falling, reaching negative territory in Denmark and Sweden (Sweden now back at zero again).

On the other hand, if interest rates stay low, this might squeeze bank profits, if banks are unwilling to pass on low or negative interest rates to customers. This seems to be the case. In spite of negative policy rates since 2012 in Denmark, it was only in 2019 that Danish banks started charging negative deposit rates towards retail customers, and still only on large deposits (typically above EUR 100,000). An incomplete pass through of negative rates hurts bank profits, squeezing their resilience.

Finally, in the paper, I discuss briefly the possibility that the next crisis might arise in nontraditional banking areas, such as the emergence of credit extension by non-regulated financial institutions or cyber risks.

The publication (Nordic Economic Policy Review) also includes great comments from two discussants of my paper: Anneli Tuomenin, CEO of the Finnish Financial Supervisory Authority and Peter Englund, Professor at the Stockholm School of Economics. Both largely agree with my assessment that the Nordic financial system is more robust today. Anneli is, though, perhaps even more worried than I am about the current low interest rate environment and outlines an additional number of non-traditional risks, such as climate risk and cyberrisk. Peter discusses whether banks really are that much better capitalized today (has capitalization gone up or risk weights down?) as well as additional risks associated with low interest rates. Read their comments. The main point is, I believe, that all of us share the view that we are particularly concerned about risks associated with low levels of interest rates.

The publication also contains additional interesting articles on the banking union, on macro prudential regulation, on monetary policy and household debt, on bail-in instruments, and other interesting topics. If you are interested in financial stability, the publication should be a must-read.

Lessons in light of the corona crisis

As mentioned, I wrote this paper in January 2020, right before the outbreak of the corona crisis. In the paper, I conclude as mentioned that the financial sector is more resilient today than in 2008. Now, we are in the midst of a recession that will cause a considerably larger fall in economic activity (on the short run) than during the financial crisis in autumn 2008. In autumn 2008, banks went belly-up and many had to be rescued. What has happened this time around? No bank has gone bankrupt, no banks have been saved, spreads are up on financial markets but not as much as in autumn 2008 (they were briefly in March, but came down quickly again). In autumn 2008, banks cut lending dramatically. Today, banks are helping customers getting through the crisis. I think this is important to emphasize, as you can still find people who argue that banks are not much more robust than they were in 2008. I judge that they are.

I am not saying that all banks will survive this, and I am not saying that we will not face any threats to financial stability. But I am saying that, given the fact that this recession is even deeper (on the short run) than the 2008 recession, and the fact that we are not witnessing the problems we did in 2008, this indicates – at least until now – that the financial system is more resilient today. Of course, should the situation turn to the worse, e.g. with a new wave of the virus, things will look different.

The paper was presented at a webinar on June 16, 2020. The presentation was followed by a panel discussion on “Will the corona crisis also trigger a financial crisis?”. Panelists included Karolina Ekholm, Stockholm University and former deputy-governor at Riksbanken, Lars Heikensten, the Nobel Foundation and former governor of Riksbanken, Kerstin Hessius, CEO of the Third Swedish National Pension Fund and former deputy-governor at Riksbanken, and myself. The panel was moderated by Peter Englund. It was an interesting debate.