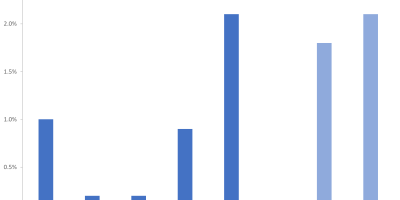 Mortgage rates have risen during 2022, as a consequence of higher monetary policy rates. For different countries, Figure 1 compares mortgage rates at the time of writing (November 2022) to rates in the beginning of the year. In the US, 30-year mortgage rates are currently close to 7%, compared to 3.5% in January. Similar increases are seen in other countries.

Stock markets are also down this year. Depending on where you look, markets are down some 20%. Lower stock prices reduce the value of people’s savings, for people saving in stocks. When people see their wealth diminished, they tend to cut consumption, academic literature also finds (link, link).

So, here we are. Mortgage rates are up this year, stock markets are down, and we are all speculating whether we will enter a recession and, if so, how bad it will be.

It seems reasonable to hypothesize that people cut consumption more if both stock markets fall and mortgage rates rise, compared to a situation where households are affected “only” by rising mortgage rates or falling stock prices. But how much more? Is the total effect on consumption the sum of the effect from the stock market on its own and the effect of an interest-rate change on its own (as identified in the existing academic literature), is there a diversification effect that softens the total impact, or is the total effect even magnified when households are hit by shocks to both markets? In new research (link), Rikke S. Nielsen, Linda S. Larsen, Ulf Nielsson, and I provide first answers to these questions.

To conduct such as study, you need detailed data on households’ stock market investments and their mortgage financing decisions. We have access to such data. We study individual-investor panel data during 2007 to 2011 from Denmark. We naturally look at households participating in both the stock market and the mortgage market, i.e. homeowners with a mortgage and stock holdings. In total, we examine 83,083 such households.

As our laboratory, we look at how people responded to the eruption of the financial crisis in late 2008, when mortgage rates rose and stock prices fell. To reflect pre-crisis conditions, our base is end-of-year values in 2007. We then follow households during 2008 and a three-year period after the negative shock (until 2011).

In Figure 2, I highlight in grey the mortgage rate and stock market developments between late 2007 and late 2008, i.e. the shocks that we study, as well as the period thereafter. Both the Danish and the global stock markets fell dramatically during 2008, by some 50%. At the same time, the short rate on Danish mortgages increased by approximately 50%, from around 4% to 6% at its peak.

In total, we look at four types of people:

We compare how these different groups of households adjusted their consumption when exposed to the negative events in 2008. To do so, we use so-called “Triple-Difference estimations”. These estimations exactly allow us to identify how falling stock markets and rising mortgage rates affect people particularly exposed to such events, compared to people less affected by the events.

Table 1 includes the results from our “Triple-Difference estimations”.

The main result of our analysis appears in the first row of Table 1. The negative number -0.197 means that households highly exposed to both the mortgage market and the stock market reduce consumption in 2008 by 20% more than households having only little exposure to stock and mortgage markets. Obviously, an additional 20% cut in consumption during the course of one year is an economically large effect.

Using the financial crisis as a laboratory, we find that households cut consumption particularly much if they are hit by falling stock prices and rising mortgage rates. The negative effects last several years.