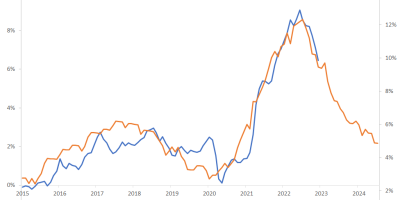 Inflation in the euro area is sky high but monetary policy rates are negative. I have argued that ECB is behind the curve: Rates should have been raised months ago. But perhaps this critique is unfair. Perhaps monetary conditions have already tightened, as bond yields have risen in expectation of future hikes in monetary policy rates and reductions in QE. Whether monetary conditions stimulate inflation depends on real yields, though, i.e. nominal yields less inflation expectations. Using inflation-linked swap rates as proxies for expected inflation, a choice I discuss in my next blog post, euro area inflation expectations have risen faster than nominal yields in countries like Germany, meaning real yields have fallen. On the other hand, in countries like Italy, where spreads to German yields have widened, real yields have increased. Whether monetary conditions have tightened thus depends on the country in question. This makes it difficult for ECB to set the right policy rate for the euro area as a whole.

Inflation in the euro area is now exceeding 8%, more than four times above ECB’s 2% inflation target. It is scary and makes people poorer. Core inflation, i.e. inflation less energy, food, alcohol and tobacco, is also too high at 4%, see my previous post (link). ECB monetary policy rates are still negative though. ECB is behind the curve.

At its December 2021 meeting, ECB announced it would reduce its asset-purchase programs. ECB would still buy government bonds, but at a slower pace. Current projections say that net asset purchases will be faced out during summer, paving the way for interest rate hikes. During recent weeks ECB has started to prepare markets that rates will be hiked this year, probably in July for the first time. The rhetoric has become more aggressive.

The reduction in asset purchases and the more hawkish communication should influence market conditions. When ECB buys fewer bonds, bond yields might start rising. Similarly, when policy makers communicate their intention to raise rates, this should push up yields on longer-dated bonds as well. In other words, even if monetary policy rates are still negative, there is an argument to be made that ECB has tightened monetary conditions.

While short-dated yields have not moved much, because monetary policy rates are still low, medium-term yields (≈5 years) have increased by almost 1.5 percentage point and long yields (>20 year bonds) by slightly more than 1 percentage point.

Yields did not move during 2021. After ECB announced its asset-purchase reductions in December 2021 yields have increased, supported by increasingly hawkish communication from the ECB. German yields are now (almost all) in positive territory. As yields have been negative for many years, this is a significant development. Yields on short-dated German bonds turned negative in 2014, while the 10-year yield has been in negative territory since 2019. Now yields are positive.

So perhaps all is good. ECB has managed to lift rates on markets (if not the monetary policy rate itself) and thereby tightened monetary conditions. This should dampen inflationary pressures in the economy.

But hang on. This is not the full story.

Nominal yields have increased but most economic models imply that economic activity is influenced by real yields, i.e. nominal yields minus expected inflation, not by the nominal yield in itself. If firms can borrow at a 1% interest rate but expect prices in the economy, and thus the prices at which they can sell their products and services, to rise by, say, 3%, the real cost of borrowing is -2%. With negative real interest rates, investments pay for themselves – so to say – and firms have incentives to borrow to finance investments, stimulating aggregate demand and inflationary pressures.

To evaluate whether financial conditions are stimulating inflation we thus need to look at real yields.

Figure 3 shows inflation-linked swap rates. In an inflation swap the difference between a fixed rate and the realised rate of inflation over a certain period is exchange when the contract matures (the fixed rate and the realised inflation rate both relate to the same underlying notional amount). For this reason inflation-linked swap rates contain information about investors’ expected rate of inflation over the contract period.

ECB have managed to lift nominal yields via reductions in asset purchases and more hawkish communication but inflation expectations (proxied by inflation swap rates) have increased even more. Monetary conditions in Germany have loosened.

As a brief comparison U.S. ten-year Treasuries currently trade at close to 3% while the 10-year breakeven rate of inflation (expected inflation over ten years) is 2.5%, meaning a real yield around 0.5%. This is several percentage points higher than in Germany. Monetary policy might still be too loose in the U.S., but long-term real rates are at least higher.

German yields vs. other countries

I have used German nominal yields to measure the impact of ECB’s more aggressive communication and reduced QE on yields. Germany is the largest economy in the euro area explaining the focus. German yields are also less influenced by credit risk. Thereby they provide a cleaner picture of how the expected path of future monetary policy rates affects long yields (acknowledging at the same time that German bonds might even be so attractive that investors are willing to pay a scarcity premium to hold them, see Box 3 in this link for updated discussions and estimates).

In other countries investor require a credit risk premium when buying their bonds. When monetary policy rates are low and ECB buys bonds, as in recent years, that premium is low. But when rates are expected to rise and ECB stops buying bonds, investors become nervous and start demanding a premium. This is what has happened.

In Figure 5 I show the widening of the Italian-German 10-year yield spread since autumn last year.

While Italian nominal yields (on 10-year bonds) were one percentage point higher than German yields during 2021 they are now more than two percentage points higher. The increase in German yields (Figure 2) and the widening of the Italian-German yield spread imply that yields in Italy have increased to more than three percent today. The last time Italian yields were above three percent was in 2018. Assuming the same inflation expectations in Germany and Italy, i.e. euro area wide inflation expectations, this means that Italian real yields have increased significantly recently. Monetary conditions have tightened in Italy.

The fact that real yields have started diverging across euro area countries – falling in Germany and increasing in Italy – creates additional challenges for ECB. ECB would like rates to increase equally much across countries, such that their policies work equally across the euro area. Alas, they do not.

Whether inflation risk premiums exist is an important question in itself. I will therefore dedicate a separate analysis to this – it will be my next blog post. I can already reveal the main conclusion though: whether risk premiums exist or not, inflation expectations have increased in the euro area.

Inflation in the euro area is high but ECB policy rates are negative. ECB is behind the curve. ECB has become more aggressive in its communication, however, and has reduced its pace of asset purchases, both of which raise yields on bond markets. In isolation this corresponds to a tightening of monetary conditions. Whether monetary conditions stimulate aggregate demand depends on real rates though. Real rates are nominal rates less expected inflation. Expected inflation, measured via inflation-linked swap rates, has increased more than nominal bond yields in countries such as Germany. In Germany real rates are lower than they were last autumn. Monetary conditions have loosened in Germany, in spite of ECB’s more hawkish communication.

In other countries, those with a lot of debt, spreads to Germany have widened, meaning nominal their yields have risen more than inflation expectations. Monetary conditions have tightened in those countries. These divergences between euro area member states complicate ECB’s calibration of the right stance of monetary policy.